Return to the Archives page. 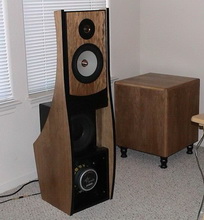 Strange as it may look at first glance, the Orion actually turns out to be a very cosmetically pleasing speaker! This set is done in Cherry MDF with the edges of the side pieces painted with high gloss black lacquer. The rest is done in the same lacquer but by using a pressure pot spray gun to get a textured look. The sub in the corner will go with this set to cover from about 27 Hz to 60 Hz. A Denon receiver is the currently the plan using it's built in, "small speaker" cross-over to direct > 60 Hz to the Orion and < 60 Hz to the sub. These were built for a friend and were delivered to her in Phoenix, AZ the end of October 2003. I really miss them! I have another set well under way that hopefully will be up and playing in early 2004 and that set is mine! I'm also planning some variations of my own using two of the 8" Seas drivers and also the 4" Seas. The 8" starts to exhibit some stored energy problems around 1,600 Hz which is only marginally above the Orion's cross-over frequency. Also, I think it's stressing the Seas tweeter a little pushing it down to 1,440 Hz so I'm considering using the 4" from perhaps 900 Hz to say 2,100 Hz or slightly higher. I've already measured the 4" driver and it's stored energy performance is far superior to the 8" in that range.